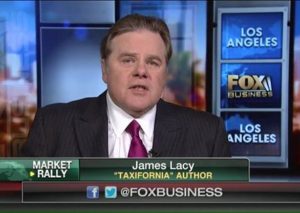 JAMES V. LACY, author of “Taxifornia“ and a frequent media commentator who appears weekly on KABC 790AM Los Angeles’ “Live in Taxifornia” show, is managing partner of Wewer & Lacy, LLP. Mr. Lacy has many years of experience as a manager and director of nonprofit organizations, and has acted as legal counsel to charitable organizations and other nonprofits. Mr. Lacy advises clients in obtaining and maintaining federal and state tax exemption. He also assists public policy organizations and trade associations in obtaining the full range of nonprofit benefits for their organizations, including: nonprofit postal permits; organization of tax deductible supporting charitable foundation subsidiaries; and establishment of separate segregated funds for political action. Mr. Lacy has experience conducting administrative litigation in U.S. Postal Service appeals, state charitable authority enforcement actions, and Federal Election Commission and California Fair Political Practices Commission matters. Mr. Lacy has been lead counsel in Federal and state court litigation on first amendment public policy issues of concern to nonprofit organizations, ballot propositions, individuals and candidates for office. He also represents political committees in Federal and state candidate election campaigns, and California ballot initiative campaigns.  Mr. Lacy was appointed by the Board of Governors of the California State Bar to the Committee on Federal Courts (1995-98). He also has served as a Member of the Administrative Conference of the United States.  Mr. Lacy is admitted to practice in California and the District of Columbia, and is admitted before the United States Supreme Court, the Federal Courts of Appeal for the Fourth, Ninth, and District of Columbia Circuits, and to various Federal District Courts.

Previously, Mr. Lacy served in the Administration of President George H.W. Bush as Chief Counsel for Technology at the U.S. Department of Commerce from 1989-91.   Mr. Lacy served in the Reagan Administration as General Counsel to the U.S. Consumer Product Safety Commission (1987-89).  He also served as Director of Export Trading Company Affairs in the International Trade Administration (1984-87), where he managed an antitrust certification program for U.S. exporters; and as a business liaison aide to the late Secretary of Commerce Malcolm Baldrige (1981-84).

In 1978, Mr. Lacy was a co-founding director of the Howard Jarvis Taxpayers Association, with California’s Proposition 13 author, the late Howard Jarvis, which has grown to have the largest membership of any taxpayer organization in California.

Mr. Lacy has served on the Board of Directors of numerous nonprofit organizations including the American Conservative Union; as National Chairman of Young Americans for Freedom co-chaired the annual Conservative Political Action Conference from 1979-1983; and Young America’s Foundation, a charitable educational organization, which now owns and maintains former President Ronald Reagan’s “Western White House,” Rancho del Cielo, in Santa Barbara, California. Mr. Lacy was instrumental in opening the negotiations which resulted in the Foundation’s acquisition of the Western White House, which is being preserved for its historical value for future generations.  Mr. Lacy has also been a member of the Board of Directors of the Ocean Institute, Orange County Fire Authority, and the Board of Visitors of Pepperdine Law School.  He was a delegate to the Republican National Conventions in 1976 and 2016.  He currently serves as a member of the Republican State Central Committee of California.

Mr. Lacy served as counsel of record in two important Federal court cases, both resulting in permanent Federal court injunctions against over-reaching campaign finance laws, known as the “slate mail” restrictions of Proposition 208 (2001) and Proposition 34 (2002). Additionally, in 2000 Mr. Lacy represented leaders of a nonprofit organization and won a two-day bench trial in Orange County Superior Court against City Council Members of the City of Mission Viejo on seven counts of violation of the state’s sunshine law, the Brown Act. And in 2007, Mr. Lacy successfully settled Brown Act claims for a client against the Capistrano Unified School District, resulting in negotiated sanctions against the district to help stop closed session abuses.

Mr. Lacy received his Juris Doctorate degree from Pepperdine University, with summer study at Stanford University School of Law in civil rights litigation, and his undergraduate degree in International Relations from the University of Southern California, with summer study in Switzerland at the University of Geneva’s “Cours sur les Institutions Internationales.” Mr. Lacy has published articles in several legal journals, including the Stanford Journal of International Law (“The Effect of the Export Trading Company Act of 1982 on U.S. Export Trade,” Volume 23, Issue 1, 1987).

He lives in the coastal community of Dana Point, California with his wife, Janice, and their German Shepard, “Seal.” From 1998 – 2006, he served as a Planning Commissioner, two terms as Chairman of the Planning Commission, member of the City Council, Acting Mayor, and Mayor Pro Tem of the City of Dana Point.  Lacy is publisher of an on-line news and political commentary magazine, www.capoliticalreview.com.  Lacy’s first book “Taxifornia” was a Politico best seller, and he is editor and a principal writer of “Taxifornia 2016: 14 Essays on the Future of California.”  In 2017 Lacy co-authored “California’s War Against Donald Trump.”